RSS
← The Stone-Child of Sens
Stream of WTF →

I think this may be the very first time I’ve read a book not entirely because the story was engaging, but largely because I needed to finish it so I could review it and offer, I hope, some sound advice. I started in on Ember Rising Light here, but now that I’ve finished the novel, I’d like to give it a full and thorough review. 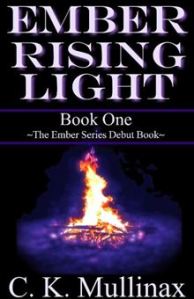 First, a disclaimer of sorts: I admire self-published authors greatly. I think what C. K. Mullinax has done here is an impressive and noteworthy feat. She spent a summer writing something she loved enough to put out there for the whole world to see. There is a level of achievement and accomplishment that should be noted and celebrated when a person can make a story come to life. Mullinax did this. In fact, it seems she did this many times over as, apparently, there are six books in the series and a reader’s companion on the way (see author’s website).

I should also mention that the story is not without its compelling moments. At more than 1300 pages, I could not have made my way through the entire thing without at least the smallest amount of interest in what was going on. In fact, I think there are strong bones for a very successful story here. That being said, there was a substantial amount of meat and fat choking those bones to death.

In something akin to Twilight legacy, Ember Rising Light is described like this:

A shrouded world – hidden in plain sight. A place where darkness hides evil and pure light veils extraordinary power… Tray and Ember Pateman are gypsies gifted with epic supernatural skills. They must learn to use their amazing powers as the shadows approach. Unearth a secret culture. Discover the unknown. Unravel the mysteries. There’s no way to prepare for – this…

If you read my previous post, you can see already where my punctuation meltdown was born. In just the teaser, you get two hyphens and two sets of ellipses. I won’t reiterate at length, but this is truly indicative of the body of the novel. A lot of the technical errors in this novel could have been solved by hiring a professional editor. I understand that this isn’t a cheap endeavor and self-publishing leans on minimalizing initial costs, but I could have easily put the book down without finishing it based on the seemingly random and occasionally forced use of awkward punctuation had I not been so invested in making this a reviewing pet project.

The protagonist is a high school freshman who narrates in the first person with occasional switches to her brother’s first person point of view. The bulk of the novel takes place set in the high school and, more specifically, a lot of it takes place in the cafeteria. This is where I really started to feel influence from the Twilight novels. Add in the discovery of magical powers, a secret society of supernaturals, and an inherent introversion that lends itself to all the manias and social pitfalls of a school-aged outcast. Keeping in mind that this is a first person narration, pepper the novel with wholly unbelievable slang (flippin’ and ginormous are used to distracting excess) and an unreal level of self-doubt and self-judgement in the protagonist. The result, unfortunately, is a character that borders on manic depression, is self-involved to the point of nearly killing everyone else, and endlessly bemoans her extreme modesty (regularly five layers of clothes), lack of sexuality, inability to pick up even the most basic social cues, and hyper manic attachment to anyone that doesn’t punch her in the face upon meeting her. Although I do not condone violence or consider myself a particularly intolerant person, I leaned heavily toward punching her in the face from start to finish.

None of the other characters are as utterly unlikable as Ember. Even the characters you should abhor have more in common with an actual person than the amalgamation of crippling traits that is Ember. I can assume that there is a subset of readers that will find one or more of her flaws endearing or familiar enough to empathize with her, but I think it must be a very small or very narcissistic subset. I think even the greenest agent or semi-well-read beta reader might have pointed out the problem with an unlikable hero. Mullinax’s acknowledgements suggest that there were readers or editors among her friends, but this is another instance where a more professional eye could have done wonders for the novel as a whole. The character is vital to the story, but a reasonable balance of positive qualities with a significantly shorter list of flaws would have done wonders.

The plot moves surprisingly well. There is a fluidity and ease in which the story progresses that supports my hypothesis that Mullinax is actually a very good writer with very bad habits. There were moments that I had to remember my early days as a boy trying to puzzle my way through endless Judy Blume books just so that I could validate the importance of who likes who and hiding an iPod from school administrators. Truthfully, those moments seem rather mundane and meaningless to me when compared to a burgeoning new and completely alien power growing within that is capable of destroying, according to the author, an entire county by accident. However, summoning up memories of budding breasts, nocturnal emissions, and peer gossip in Blume’s novels did wonders to remind me that young people don’t always prioritize as an adult would.

Even with a respectable skill at pacing, Ember Rising Light spends 1300+ pages without experiencing any real conflicts or, much to my dismay, reaching any sort of conclusion. Like nearly every chapter, the book ends in an ellipsis. Cutting out a healthy portion of the least significant details (an entire unresolved story line of evil goth kids) and most (please, really, all) of the internal dialogue that is truly redundant to this first person narrative could easily trim the novel down to a more reasonable length and give plenty of room to actually resolve at least one of the conflicts.

All in all, I won’t be suggesting the book to anyone outside of the already existing Twilight fan base but, truthfully, there are enough of those to give Mullinax meteoric rise among self-published authors. If she has grown as a writer between this first novel and number six (seven counting the reader’s companion?) then there is reasonable evidence that she will do quite well for herself despite the pitfalls of Ember Rising Light. If anyone has read this book or further into the series, I’d love to hear how that went.

Also, if anyone has any suggestions of other free ebooks, please let me know. I am on a budget after all.

Posted by tobiaswrites on September 18, 2012 in Uncategorized

← The Stone-Child of Sens
Stream of WTF →

One response to “Dotdotdot…”